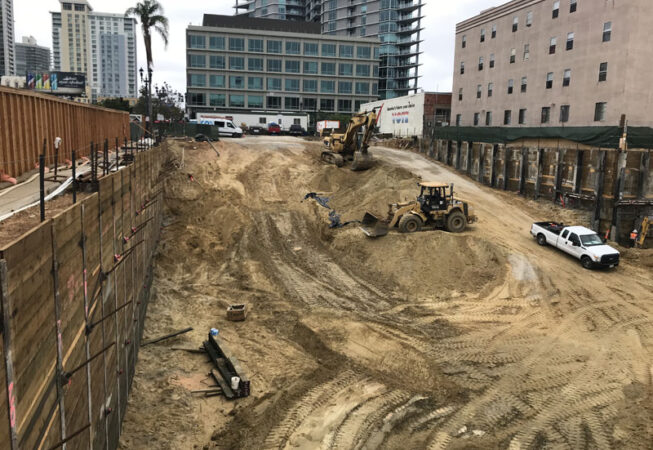 Project Description:  AEC conducted Phase I and II Environmental Site Assessments at this 40,000 square foot property in downtown San Diego. The property was slated for development as a mixed-use high-rise tower over multiple levels of underground parking. Potential environmental concerns identified during the study included the historical operation of a gasoline station in a portion of the property and the potential presence of metals-laden undocumented/artificial fill material at the property. The Phase II study consisted of the drilling of multiple soil borings and analysis of soil samples for various contaminants of potential concern.  Residual petroleum hydrocarbon impacted soil was confirmed to be present in the former gasoline station area and fill material in the upper several feet of soil at the property was found to contain the metal lead at concentrations above screening levels related to the off-site reuse of said soil. The Site was entered into the Voluntary Assistance Program of the County of San Diego Department of Environmental Health (DEH). AEC prepared a Site Mitigation Plan (SMP) for the project, and is now conducting oversight of the implementation of the SMP which includes soil profiling and management, worker and community health and safety monitoring and vapor mitigation. At the completion of the SMP implementation work, a Closure Report will be prepared for DEH approval.